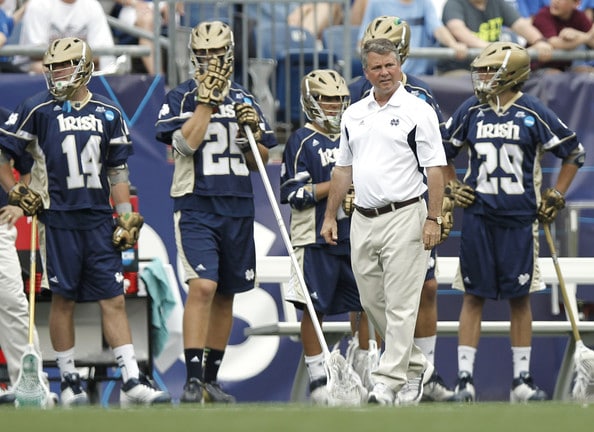 Coaching is the Corrigan family business. At Notre Dame, Coach Kevin Corrigan has continued the tradition for the past 30 years that was started by his father and uncles. During that time, Corrigan has seen the expansion and evolution of lacrosse first-hand. We were able to dive into how he created the Notre Dame lacrosse powerhouse during his recent interview with LaxWeekly.

After playing lacrosse at the University of Virginia, Corrigan made his coaching debut for Western Albemarle high school in Virginia. From there, he was an assistant at Notre Dame before coaching at Randolph-Macon and Virginia. “In coaching, it’s typical that you have to move around a bit initially. However, it was atypical that once I became the head coach at Notre Dame, I’ve been able to stay here for thirty years.” Corrigan is the longest active tenured men’s D1 lacrosse coach and it is no accident that he has held the same position for so long. Since Corrigan’s arrival, Notre Dame has a 68.3 winning percentage and has gone to the NCAA quarterfinals seven times.

When Corrigan first took the job, Notre Dame was seen as a lacrosse outpost, far away from the traditional dominant programs. South Bend, Indiana was the start of westward expansion in lacrosse. Now, more than 1,000 miles away, the University of Denver is the symbol for the West in the lacrosse world and more programs like Utah are following the westward trend. “The expansion of the game has been so gratifying and I feel like I’ve had a great view to see all the changes that have happened.”

Corrigan realizes that his job role has evolved like the game itself. “The job that I took and the job I have now are completely different.” Notre Dame athletics has made the lacrosse team a priority over the years by taking the necessary steps to making the team as competitive as possible in D1 lacrosse. “First, we added a full-time coaching staff, then a travel budget, scholarships, great facilities and most recently adding us to a great conference so we can have a very strong schedule.” While time and money have been poured into the program, Corrigan has put his heart into coaching and creating the right culture for the lacrosse team.

Corrigan’s strategy for building the culture at Notre Dame has been to focus on the fundamentals. “To me, the first step is to make sure everyone knows it’s not about you, it’s about us. Every individual has to accept the responsibility for the work that needs to be put in, but also understand that on a team there’s no individual success, only team success.” Corrigan then stressed the importance of accountability on and off the field. With this as a foundation, Notre Dame lacrosse has created a culture where everyone looks out for each other. After coaching for 30 years at the same program, Corrigan has extended his cultural vision onto many current and former players. “After players graduate, they become part of the experience for the next group of guys. On and off the field this has helped players get jobs and allow the ethos of looking out for each other to continue in the program.”

When we asked Coach Corrigan if he ever hears from his players from 30 years ago he told us that it happens all the time. He recently ate dinner with the captain of the first team he coached at Notre Dame. “When I coached him, I was 29 years old and he was 22. Now that I’m 58 and he’s 51 it doesn’t seem like that big of a spread. We’ve become great friends. I don’t think there’s anything more gratifying for me than seeing the success our guys have after graduating from Notre Dame. Not just financial success, but success being husbands, fathers and doing great things in their communities.”

Coach Corrigan has done great things at the University of Notre Dame and for the lacrosse community as a whole. Check back next week to see part 2 of our feature article with him.